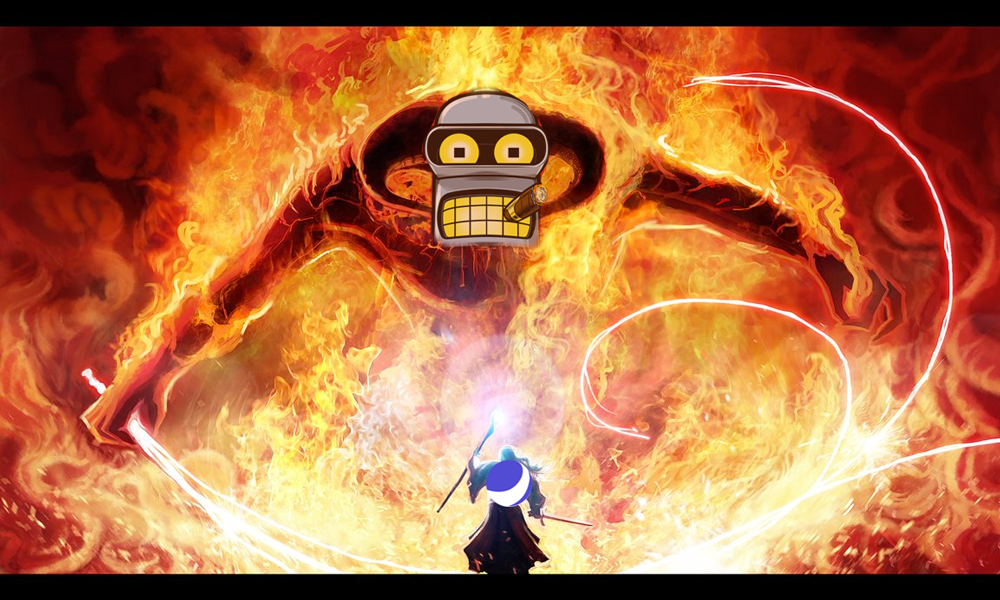 Programmatic is crowded with bot traffic. Publishers or even SSPs try to earn more, adding it to the flow. This way they get more money from advertisers but lower traffic quality and convertion ratio.

Unfortunately there is no single button to switch bot traffic off, but there is a way to filter and block it in your advertising campaigns.

We’ve developed a special script, that you need to place on your target page. The script will count users activity. For example how much pages they visit and how much time they spend on your website.

It can also count conversions, video views or any other target activity you want to achieve.

The script together with optimization rules will help you block traffic sources, that deliver you more bot traffic, than organic. You may do that by hand, but it’s a ton of work, better let our system do that for you. You can see the blacklists and whitelists any time and fix them if you think something is not OK.

Easiest way to lower bounce rate is to set optimization rules to block all sources with high bounce rate and 0 or close to 0 pageview time. Same thing applies to conversion rate and it works the same way.

Remember, there is no traffic sources with no bots at all. Internet is full of bots, even intelligent enough to bypass that filter, but you’ll get much cleaner traffic using our solution.

We highly recommend to use our script when buying RON traffic. It’s the best way to get cheap and good quality traffic.

There are a couple of ways to get free traffic for your blog or website, but they take a lot of time usually. If you need some traffic fast, but still very cheap, you can try using these 3 methods.

Pop-up and pop-under traffic is usually not expensive even from major traffic vendors. You can get 1000 clicks for just 10 dollars, which is quite cheap. Pop traffic may still be targeted and filtered by source. You should also optimize it to get desired actions from users. Installs, sign ups, etc.

Another way to get cheap traffic is using minor sources from native and display channels. One can say that small websites and apps don’t have good traffic. But thats an ad myth. There are a couple of facts, that mean just the opposite.

First. Small new websites try to build a live community to spread content organically. So they have a high percentage of live engaged traffic for you to get.

Second. Small websites are afraid to use bot traffic since they can easily get banned by SSPs or ad networks. Bot traffic can also destroy their SEO completely.

Never the less their traffic is much cheaper than that from major vendors.

Audience or Run of network traffic from all networks you can reach. It’s even about 2 times cheaper than Pop traffic, but it still can be good. There is less targeting options for RON but you can filter traffic by source. You’ll have to spend some time to get only good quality traffic, but as a reward you’ll get cheap traffic.

You may try all of those methods on REACH Network and decide which one is better.

Digital traffic market is huge. Hundreds of ad networks, thousands of websites and apps, millions of users and billions of impressions. There are also thousands and thousands of advertisers buying traffic and running ads.

Usually advertising networks and DSPs give a lot of targeting options. Well at least you can choose the websites and apps you want to run ads, country, town or even a single house.

It’s a matter of a second and even less for the whole ad network system to decide what to do with each single impression. Well if the impression is bought, banner shows up and there is nothing special about it. But what happens to traffic that nobody bought? 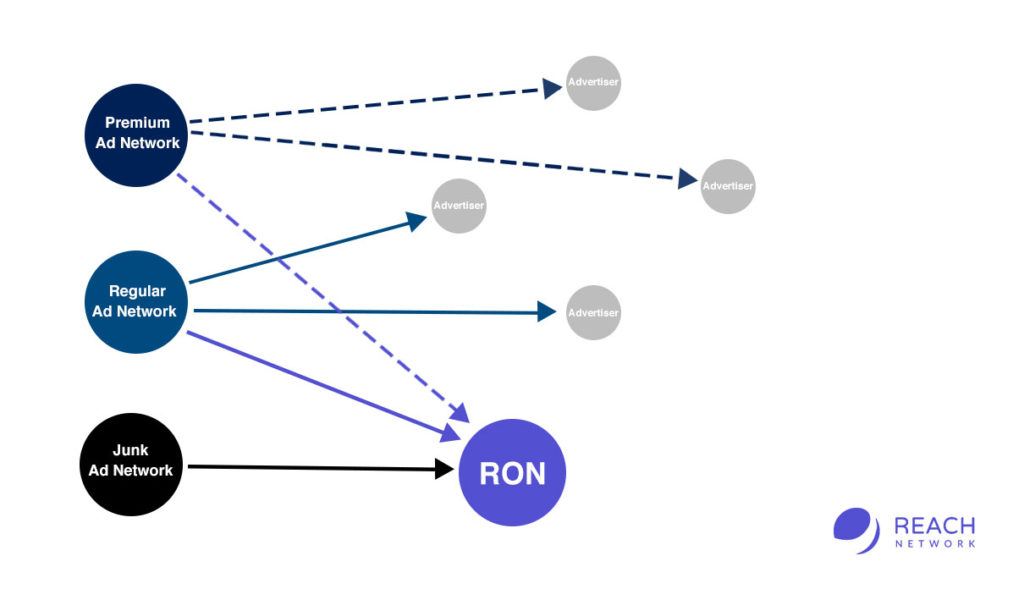 Some advertisers call it SEO-traffic since it’s cheap traffic for rising new websites SEO. Ad networks sometimes sell 100 000 clicks for $5, so you see how cheap you can boost your website visitors. But for the lowest price you’ll probably get quite poor quality.

Why audience traffic? Well it’s just not to call it RON, since many people associate it with something bad.

RON traffic is not always bad. It’s just a mix of traffic of very different quality and usually you have no ability to choose it or somehow influence it’s quality. Some networks filter out the worst bot traffic and provide OK but still very cheap traffic though. You can also test different traffic sources to optimize your spend and increase performance.

So why people buy RON traffic if it’s so unpredictable. Well, it’s a very cheap kind of traffic and you can put it to good use if you know what to do.

First, run-of-network traffic is OK for brand awareness and for testing your hypothesis on wide audience. You show your ads to a bunch of completely different people and see how it performs. As mentioned above, it’s also good for boosting SEO a bit if you have international website and it doesn’t make much difference what traffic to drive there.

But are there any ways to filter junk traffic and get only the good part of the audience? We’ll tell about that in our next blog post!

Fraud-free traffic is probably number one requirement when choosing a PPC network. So in this article we’ll explain all traffic quality assurance techniques that we currently apply on REACH Network. Briefly and accessibly.

The two pillars of fraud prevention system on REACH Network are Adometry and Integral Ad science – both experienced third-party companies offering complex fraud-fighting solutions. In addition to them we apply blocking controls that fend off ineligible users. END_OF_DOCUMENT_TOKEN_TO_BE_REPLACED

Once a month we will be posting best performing traffic sources here in our blog, as well as in a newsletter to our advertisers. Follow updates regularly for most updated traffic sources to whitelist.

To get maximum quality traffic you can choose between these 2 options.

1. Here is a list of proven quality traffic sources for Audience (PV/TOS) traffic type. Keep in mind that the volume is limited and higher bids win traffic.

Whitelist these sources IDs in your campaign setup by copypasting the whole list to Whitelist sources field. Find page views, time on site, geo and optimal bid data in the spreadsheet.

END_OF_DOCUMENT_TOKEN_TO_BE_REPLACED

UTM Tags and How They Benefit PPC Advertising

You know how sometimes when shopping you need to make a little effort to get a bonus. Like, you may fill in a questionnaire and get a discount card. It’s similar with UTM tags: you need to modify your click URL just a little to be able to get loads of valuable statistics in addition to your cool PPC campaign results. So let’s just see what UTM tags are all about and how they can make your life easier. 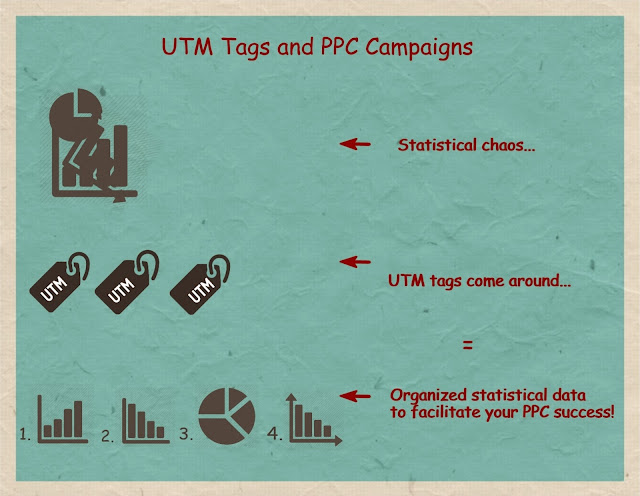 END_OF_DOCUMENT_TOKEN_TO_BE_REPLACED

Are You Making These 6 PPC Mistakes?

Mistakes are inevitable. Especially if you are new to PPC. A great way to avoid them is reading common mistakes check-lists once in a while. So read the one here to become a better PPC advertiser. 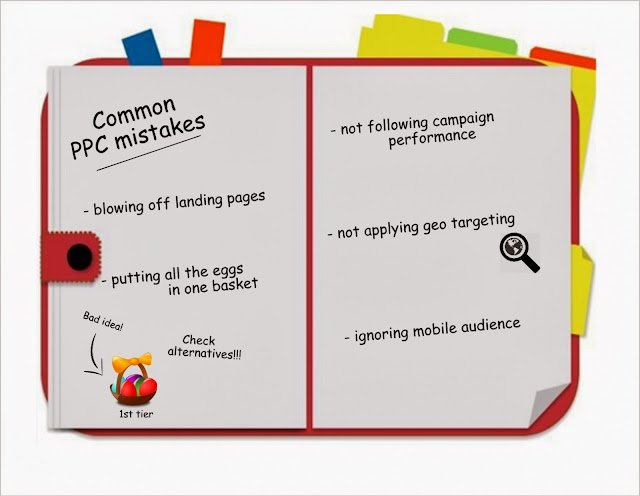 END_OF_DOCUMENT_TOKEN_TO_BE_REPLACED

There has been a slight change in the way we link your inventories to REACH Network feed.

Earlier we used xmldomain.com link type for this purpose. The new link type is pubID.xmldomain.com. You need to update the link to keep the ads flowing to your website.

Here is how you change the link:

1. Log into your profile through dashboard.reachnetwork.pro
2. Click on the “Feed” section in the left sidebar
3. Find the new link at the bottom of the page
4. Update the link.

If you keep using the old link, REACH Network ads won’t be able to reach you. So change the settings as soon as possible. And use the new link type to connect your new inventories to our feed.
So keep up with the updates and all the best with publishing on REACH Network!

This is a valuable piece both for those who already run their campaigns on REACH Network as well as for those who only plan on setting up one.

The thing is many of you don’t go beyond filling in the basic fields when tuning the campaign. As a result, you don’t use all the free advanced options that we offer. So why not leverage the functionality to the full? 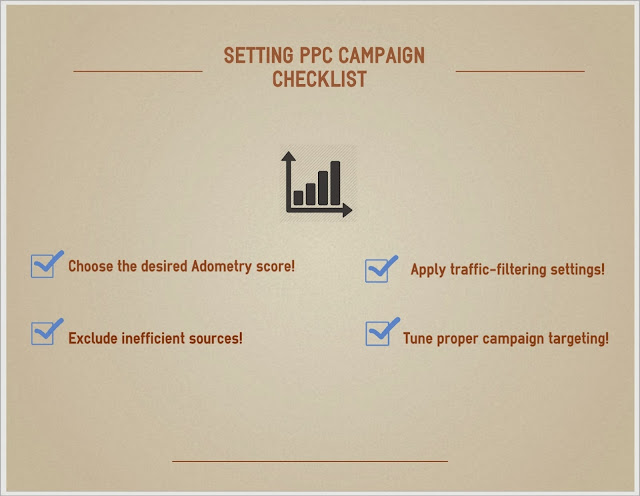 You should know that there are several campaign-setting stages when you can make your campaign more efficient, more customized and more paying-off. So go to Campaigns > New campaign and make sure all the fields on the page are paid due attention to.

END_OF_DOCUMENT_TOKEN_TO_BE_REPLACED

Can you name all the five before reading the article? I bet you can’t – it’s really hard to realize REACH network’s full potential right away. That’s why we prepared this post about traffic monetization ideas and added a few examples. 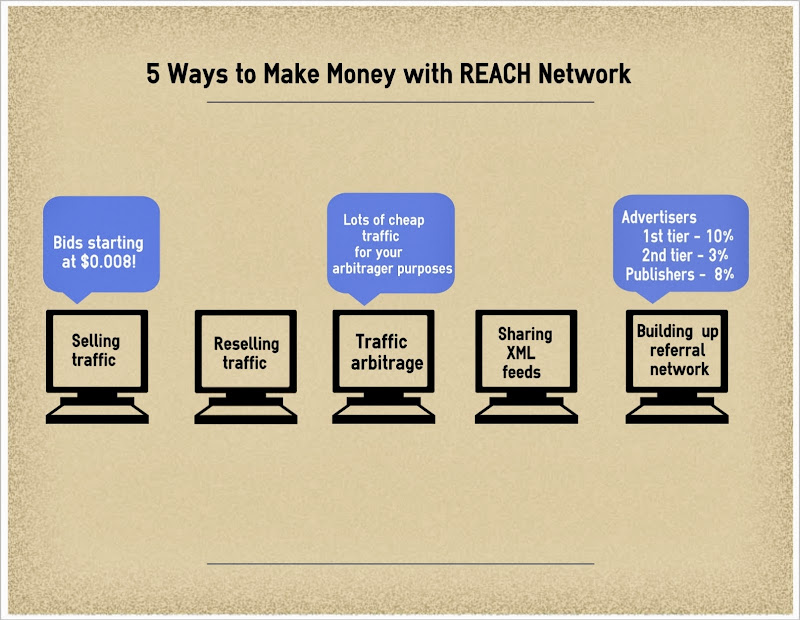 So, let’s start with the most obvious way to earn money with REACH Network.

What do publishers expect from PPC networks? Right, profits. We not just make sure you get the profits – we make sure you get them timely. That’s why we transfer payments twice a month. You don’t have to wait long to get your money on your hands and invest them further.